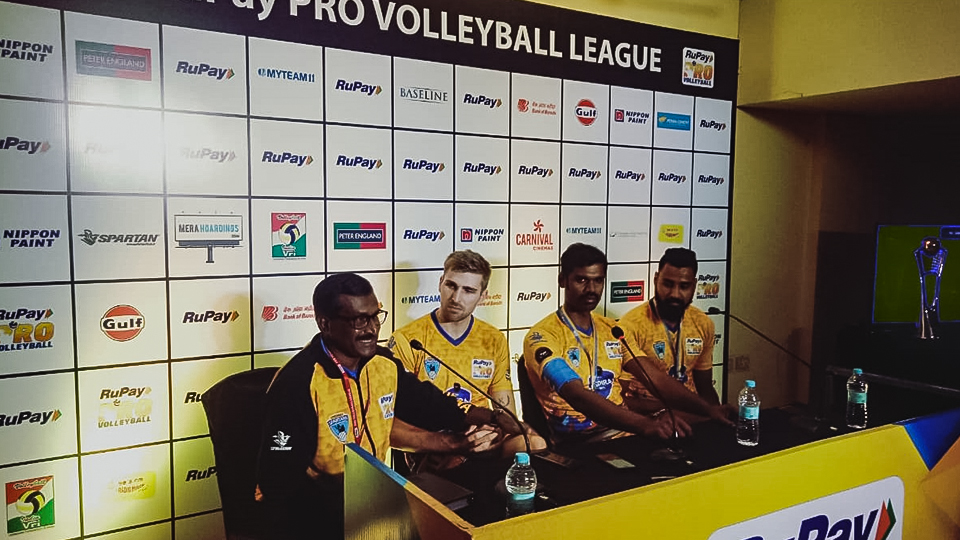 “It was a team effort, with the complete support of the management. A great victory, everyone contributed,” Head coach MH Kumara said after Chennai Spartans emerged inaugural champions of the RuPay Pro Volleyball League. Spartans put it across fancied Calicut Heroes in straight sets – 15-11, 15-12 and 16-14 – in the final at the Jawaharlal Nehru Stadium in Chennai on Friday to hand the Kerala outfit their first defeat in the competition. “I was telling my boys, unlike Calicut Heroes ours was a roller coaster ride and that, in fact, made us a cool, composed side. Not to forget the Chennai crowd who were right behind us,” added Kumara.

Spartans qualified to the Playoffs as the third team with only two wins to their name but displayed that they possess that element of surprise which makes them dangerous, especially in crunch clashes. Spartans put it across Kochi Blue Spikers 3-2 in the semifinal after being down 1-2. “Obviously it is an amazing feeling to win. It wasn’t an easy road for us. I think the experience against Kochi in the round-robin phase helped us, we went up 2-0 and lost in five,” Rudy Verhoeff said. “We realised that we had to win the final in the third set otherwise it was going to be a tough battle. We have an amazing team and an equally amazing support staff. Our owners and management too. And our home crowd was spectacular,” added the Canadian. “Calicut is a phenomenal team, not having lost until today. They are a superb bunch of players. Why we won today was Calicut relies heavily on their serve and we were able to manage their serve today,” concluded Verhoeff.

Spartans had lost to Heroes 1-4 in the league phase and exacted revenge. “This is an unbelievable moment, as many thought we wouldn’t make it to the final. Winning the title is a brilliant feeling, given that we won it against all odds,” said Akhin GS.

Captain Shelton Moses was a happy man.
“This is my home too, and I feel really happy to lift the title for my city franchise. It is the unity of the team and the management that saw us win,” he stated. Spartans belong to the House of KALS, a passionate and committed corporate entity that has been involved in developing volleyball in Tamil Nadu for over three decades. As a result of winning the first edition of the league, Chennai Spartans qualified for the FIVB Asian Men’s Club Volleyball Championship.