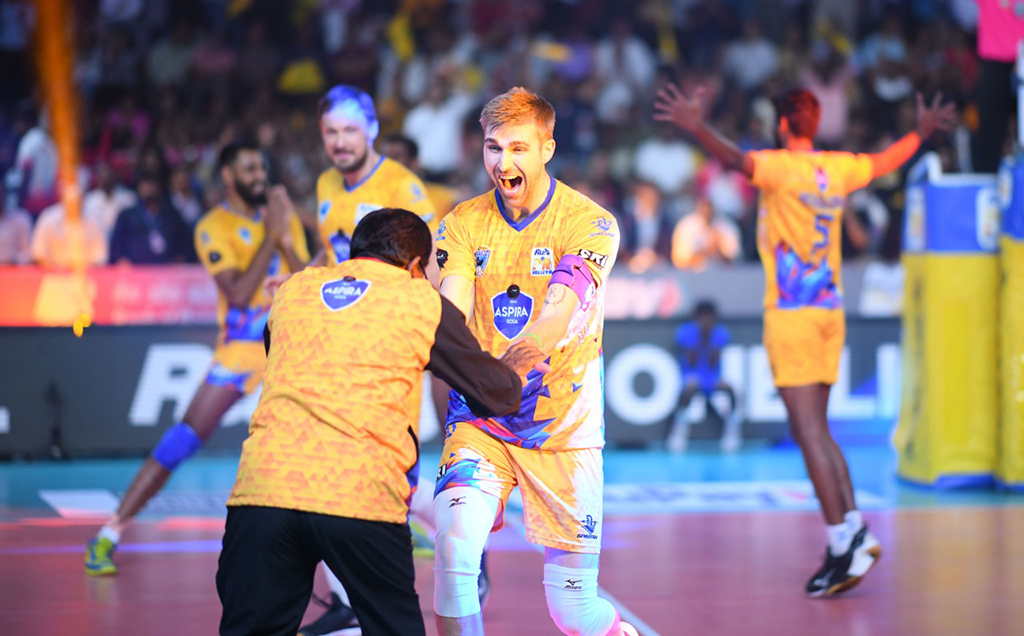 By virtue of the victory, the side sealed its spot in the Asian Men’s Club Volleyball Championship, to be held in Chinese Taipei in April. Calicut, which was unbeaten until the night of the final, didn’t turn up when it mattered the most. That it could not win a set in the summit clash would hurt the Kerala-based franchise more. The ever-consistent Rudy Verhoeff, who top-scored for the champion with 13 points, became the first player to cross the 100-point mark in the six-team competition. Chennai took the early initiative and went into the first Technical Time Out (TTO) with an 8-5 lead, thanks to spike points from four members of its starting six. Heroes opted for a Super Point just as it was back on court after the interval. Spartans skipper Shelton Moses gifted it to his opponent with a service error, reducing the advantage to a single point.

Rudy effected a crucial block at 10-7, giving the host some momentum to wrap up the opener. At 14-11, the Canadian produced a spike to close out the set. Calicut was in unfamiliar territory as it had not lost the first set in any of its previous six matches (five round-robin and one semi-final). Though Heroes captain Jerome Vinith committed three opposite errors at the beginning of the second set, the away side squared things up at six all. Spartans then snapped up two successive points to once again head into the TTO with an (8-6) advantage. At 8-10, Calicut called for a Super Point and successfully converted it to draw parity at 10 all. Next, it was Chennai’s turn to go for a Super Point. In a perform or perish moment, overseas star Rudy showed all his experience by unleashing a spike.

Like in the first set, the 29-year-old applied the finishing touches to the second, this time with a brilliant block. The tourist squandered the opening two sets and had to clinch the third to stay alive in the title decider. Chennai dominated the initial phase of the third set as well, coming out on top at the TTO, with a three-point cushion at 8-5. Calicut looked recharged after the break and pocketed six consecutive points to earn supremacy at 11-8. After a brief hiccup, Spartans was back to its best. A block and a spike from GS Akhin granted the home team a championship point. It didn’t pounce on the opportunity, but was second time lucky at 15-14.