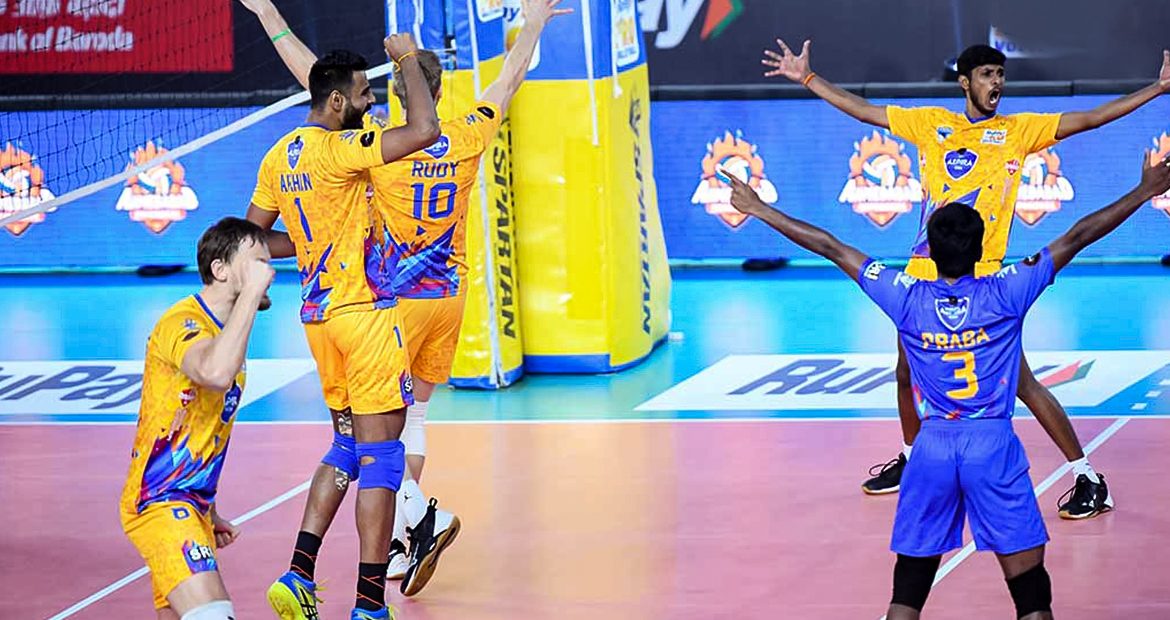 After suffering defeats against Kochi Blue Spikers and U Mumba Volley in its previous league assignments, Chennai rose to the occasion on a must-win situation and snapped up two invaluable points. Foreign signing Rudy Verhoeff, the top-scorer in the six-team tournament, racked up his third 20-pointer to push his side to victory. Naveen Raja Jacob and Ruslans Sorokins also played pivotal roles, picking up 17 points each. Knowing only a win will take it through to the top four, Chennai stepped on court with intent. Everything seemed to be going the host’s way as it coasted to a 9-3 lead heading into the first Technical Time Out (TTO).
Rudy and Naveen, who have been the backbone of the side since the start of the event, dished out a Super Serve and Super Point respectively in the first set. The home team clinched the opener 15-6, without much fuss.

Ahmedabad, which came on the back of three successive losses, looked in better shape at the beginning of the second set. It held a three-point edge at 8-5 during the break. Spartans called for a Super Point at the restart and successfully claimed it to reduce the deficit to just a solitary point. At 13-10, the visitor was well placed to pocket the set, but Chennai scored two consecutive points to bring life back into it. Naveen committed an error on Defenders’ set point and let it level the match at 1-1. Both teams were on even keel at the start of the third set, with the scores locked up at three each. At the interval, Ahmedabad had a two-point cushion at 8-6 courtesy of Gurinder Singh’s triple strikes. Spartans kept tabs on the scoreboard and drew parity at 11 all. It then surpassed its opponent as the set wore on, sitting pretty at 14-12. A spike from Sorokins propelled it to triumph at 15-13, handing it a 2-1 advantage in the clash.

After edging out Ahmedabad in the preceding set, Chennai was in the mood to wrap up the match quickly. It dominated the initial stages and recorded a two-point lead at 8-6 as the teams went in for a quick breather. The host was in cruise control and sealed its semis spot by taking the fourth set 15-11. The local faithful, who painted the arena yellow, roared in delight, thanks to the home side’s showing in the do-or-die match-up. Spartans was in the ascendancy in the decider as well and won it 15-12.