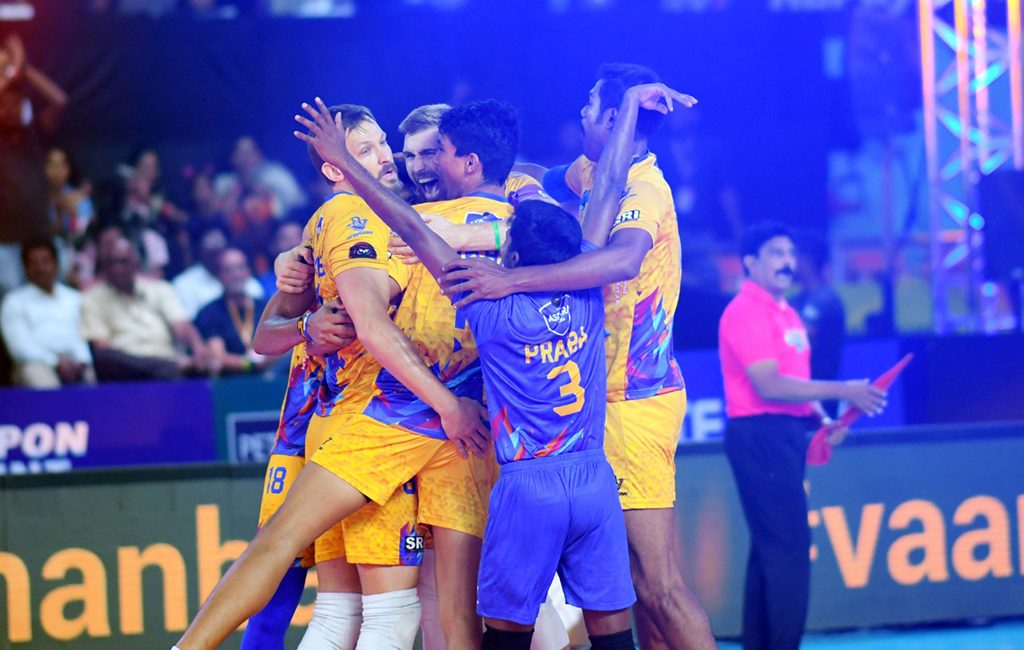 In a contest where fortunes fluctuated from one team to another, it was Chennai Spartans who held their nerve to score a nail-biting 3-2 (16-14, 9-15, 10-15, 15-8, 15-13) win over Kochi Blue Spikers and book their place in the Pro Volleyball League final at the Nehru Indoor Stadium here on Wednesday evening. Chennai will lock horns with Calicut Heroes in the summit clash on Friday.

For Chennai, Ruslans Sorokins (17 points), Naveen Raja Jacob (13) and Rudy Verhoeff (11) played their parts in scripting a well-deserved win. Chennai’s coach MH Kumara felt the win was thanks to a stunning comeback by the team in the fourth set that helped them stay in the hunt before going for the kill in the decider. “We brought in the experienced setter Kapil Dev during the fourth set and he showed his class with a Super Point. That particular point not only helped us get the lead in that set but changed the course of the match,” Kumara said after the match.Kochi’s star player David Lee too concurred with Kumara’s views. “Kapil did make a difference because Chennai weren’t serving at their best in the first three sets but we gave them a chance to make a comeback in the match,” David said.

The opening set began with Chennai repeatedly committing errors in their serves with Naveen, Akhin, Rudy and Ruslans being the guilty ones. A Super Point (2 points) helped Kochi get a slender 9-8 lead. Chennai quickly regrouped, and Rudy’s crucial smash during a Super Point helped Chennai level things at 11-11. From thereon, Ruslans took over. The Latvian fetched three crucial points to help Chennai pocket the first set 16-14. Kochi brought parity to the contest by winning the subsequent set 15-9. That period of play saw both teams fight tooth-and-nail to be placed at 5 points apiece. A Super Point by Manu Joseph and a spike point by S Prabagaran helped Kochi take an 8-5 lead. They maintained that lead thanks to Manu’s (7 points in that set) efforts on the court. Kochi once again called the shots in the third set as they raced to a 5-1 lead. Despite a Super Point by Ruslans, Kochi enjoyed an 8-5 lead in that set. The visitors rode handy contributions from Manu (4) and David (4) to clinch the set 15-10. Chennai, trailing 1-2 in sets, remained in the hunt by winning the penultimate set 15-8. Kapil Dev’s crucial Super Serve was instrumental in helping Chennai take a 9-6 lead. Rudy’s smash during a Super Point saw Chennai swell the scoreline to 13-7. The hosts benefitted from strong showing from Rudy (4) and Naveen (3) to take the contest to the decider. In the fifth and final set, Chennai allowed Kochi to come back despite having an 8-4 lead. David (4) and Andrej Patuc (1) kept Kochi in the hunt. But Chennai yet again rose to the occasion to win the set 15-13 and with the contest.