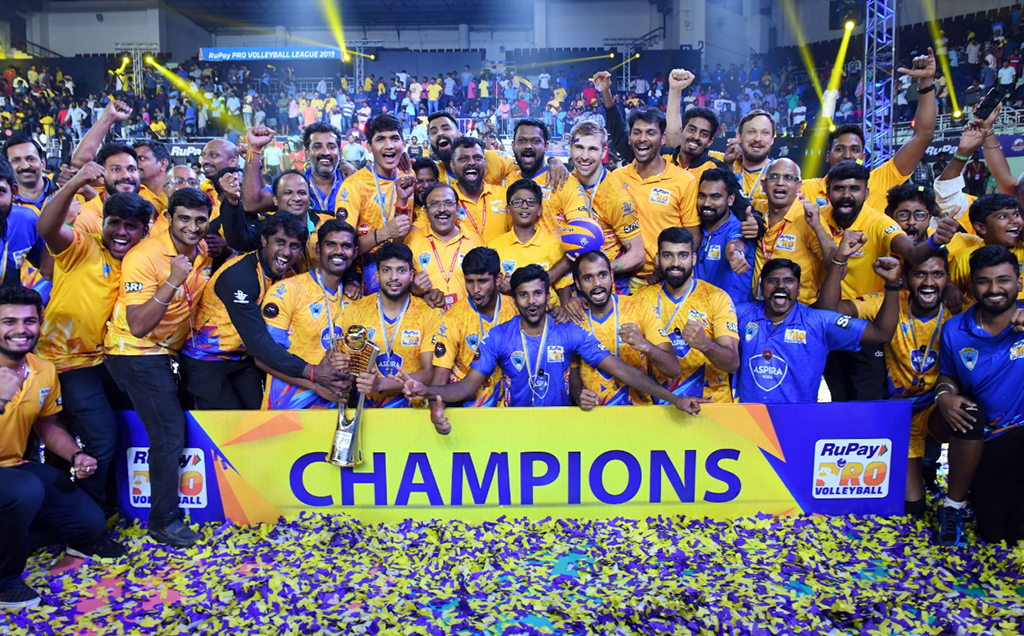 The supremely confident Calicut Heroes was widely tipped to win the RuPay Pro Volleyball League (PVL) title on Friday. After all, it had entered the final unbeaten. So, Chennai Spartans’ task was to snap the winning streak and prove that Calicut is vulnerable. Spartans did it rather emphatically, managing a straight-set win — 15-11, 15-12, 16-14 — to emerge the champions of the inaugural season of the RuPay Pro Volleyball League at the Nehru indoor stadium.

The much-talked-about crowd support (for Chennai) came to the fore as the stadium was nearly filled, mostly by the Chennai fans. The crowd was on its feet as the Chennai team took a victory lap to acknowledge the fans’ support. Rudy Verhoeff was the top-scorer for Chennai with 13 points. Calicut was unusually sloppy in the first set, committing a lot of unforced errors, while Chennai precisely placed the ball mostly. Verhoeff and Naveen Raja Jacob scored four points each as Chennai took the first set 15-11. Chennai rode the momentum in the second set. It went up 4-1 in no time. It called for super point and clinched it to get to 12-10, as Verhoeff’s spike bounced sideways off an opponent’s hands into the crowd. In the third set, after Ajith Lal and Naveen successfully spiked once each for the score to be 1-1, it was 2-2 and 3-3 before Rudy’s spike helped Chennai edge ahead 4-3. An unforced error from C.K. Ratheesh meant Chennai was up 5-3 when Calicut opted for a time out.

From 6-5, after the time out, Chennai got to 8-5, but an error from Ruslans Sorokins, and successful block and spike from Iluoni Ngampourou and Ajith Lal helped Calicut catch up and make it 8-8. Chennai lost its super point then and Calicut went up 10-8. Chennai took a time out soon after, and Jerome Vinith had ensured that Calicut was up 11-8 with a successful spike. From there, Calicut let it slip as Chennai drew level 13-13. Akhin’s block made Chennai play for the Championship point on 14-13, but a spike from Ajith Lal made it 14-14. Two successive errors from the Calicut captain Vinith made Chennai the eventual winner.
The result (final): Chennai Spartans bt Calicut Heroes 15-11, 15-12, 16-14.