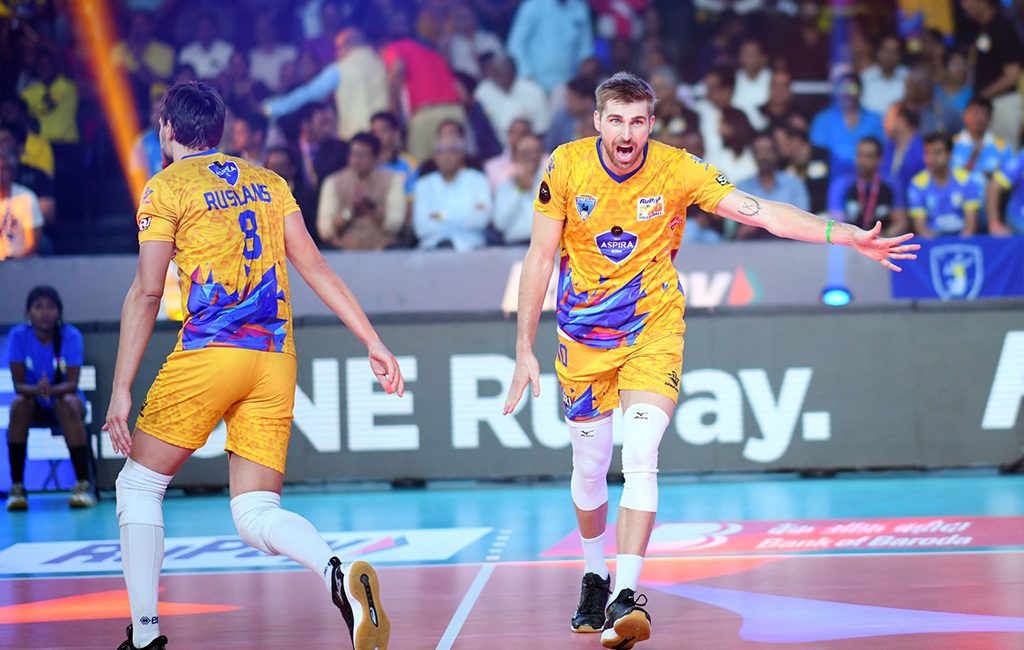 Crowd support can do wonders to a team and Chennai Spartans proved this in ample measure as it defeated Kochi Blue Spikers 3-2 (16-14, 9-15, 10-15, 15-8, 15-13) in the semifinals of the RuPay Pro Volleyball League at the Nehru Indoor stadium on Wednesday. Spartans will meet Calicut Heroes in the summit clash on Friday. Down two sets to one, Spartans were staring down the barrel when it won two points after long rallies, thanks to spikes from Naveen Raja Jacob and Rudy Verhoeff. From 7-6, a super serve from Kapil Dev took Spartans to 9-6. Another spike from Verhoeff on super point helped Chennai race ahead 12-7. A rare error from Joseph allowed Spartans to take the set and take the match to a decider.

Riding the wave, Spartans took an 8-4 lead in the fifth set, with Ruslans Sorokins producing brilliant blocks and spikes. However, a series of errors from Spartans allowed Blue Spikers to fight back and even nudge ahead 11-10. Local boy Naveen stood up to be counted, including on super point, as Spartans made it 13-11. Akhin, who had scored the first two points in the set, clinched a point to take Spartans closer. Sorokins, Spartans’ star of the day with 17 points, deservingly delivered the winning point. In the first set, the teams were nip and tuck as they kept trading points with Spartans ahead 8-7 during the mid-set break. Though Spartans were the better side, the players committed as many as five errors on serve and when Shelton Moses made an unforced error, Blue Spikers led 14-13.
However, Sorokins pulled off a heist, winning the last three points for Spartans with three spikes, including a deftly placed one on set point.

The second set saw Spartans once again mess up their serves and Blue Spikers’ Manu Joseph was in fine form, scoring seven points. From 5-5, Blue Spikers ran away with the set, taking a 11-6 lead after winning both the super points. They closed out the set 15-9. Blue Spikers continued to be strong defensively, neutralising Spartans’ offensive play easily. Spartans couldn’t find the right position on spikes while the blockers were rather ineffective as the hosts surrendered the third set meekly. Things took a turn in the fourth when Spartans made an inspired call, drafting in the experienced Kapil Dev who immediately provided more power at the net with his blocks and changed the course of the contest. The result: Chennai Spartans bt Kochi Blue Spikers 3-2 (16-14, 9-15, 10-15, 15-8, 15-13).